The 7th annual Isla Blanca Kite Festival started with a brief rain shower. There was a delay in putting up kites while fliers watched dark clouds approach from the Caribbean. However, the center of the storm passed north of our location, and the rest of the weekend was sunny and warm. The kites went up quickly, and the festival was on!

The previous evening Penny Lingenfelter flew her Revolution in Palapas Park, the main park in downtown Cancun. The park is always crowded on weekend evenings. Passersby were intrigued by the unusual activity. Then Penny gave several children the opportunity to fly a UFO. Both girls and boys enjoyed spinning the UFO over their heads or at their sides.

The Isla Blanca Kite Festival began with a visit 10 years ago to this beautiful beach about 8 miles north of Cancun, Mexico. The water is turquoise blue. The sand is made of calcium carbonate (ancient reefs and seashells) and does not get hot when temperatures rise. Isla Blanca is not actually an island, but a peninsula. At the festival location, the peninsula narrows to a beach about 100 yards wide between the ocean and the lagoon (more at low tide). There is almost always a good wind blowing. It is an ideal location for kite flying.

This weekend, the temperature was a balmy 85 degrees. The wind was about 18-25 miles an hour and from the north east. Starting on Saturday, Roberto Gonzalez and Cira Caballero from Cancun put up their 150 kite arch, bols, ground bouncers and foils. On Sunday they put up two arches. Charles Stewart from New York put up his most stable dragons and single line kites to cope with the high winds. Music and animated announcing was provided by Marco Espinosa, from Perico’s Restaurant in Cancun. Steve Lingenfelter gave able assistance wherever it was needed. Jay and Jen, two Cancun residents from Toronto, helped out with the activities. Gonneke Vermeij from the Netherlands helped out the sales staff from Cancun Pro Kids.A mellow atmosphere prevailed as beach goers enjoyed the sun, sand, surf, and kites. Several attendees said that they had been coming to the festival for years. Many more said they would be back next year!

On Saturday, Penny Lingenfelter from Washington State presented the international debut of her “Mario” skit. About 20 kids had a great time dressing up and running around with kites on a stick. She also enjoyed giving kite flying lessons to the public.

After a lunch provided to the children and kite fliers by Perico’s, Penny gave a kite flying demonstration with her Revolution kite and a scaled down version of her renowned Peter Pan routine. The next activity was bol races for the teens. Girls and boys ran separately. The racers gave their all as they skidded face first over the finish line!

Roberto and Cira organized the “Pinata de Papalotes” (candy drop) using a home made rig. There were three age groups – elementary, middle school, and teens and adults. The adults enjoyed it as much as the kids!

On Sunday, Penny gave a demonstration of dog staking with her Revolution. The music and the graceful movements of the kite captured the attention of the crowd. They were really impressed when she plucked her kite out of the air!

Penny once again presented the Mario skit, involving about 15 local children in the fun. There were monsters, ghosts, and princesses!

The festival was started to share the joy of kiting with the people of Cancun, and the children of a local group home and school called Cancun Pro Kids. Last year the organization started holding a raffle and selling kites at the event as a fund raiser. It was so successful that we did it again this year.

On Sunday the winners of the bol races were give a prize of a free raffle ticket. After the candy drop, the climax of the weekend’s activities was the raffle drawing. One lucky winner of a kite had put only one ticket in the box – the ticket he won in the bol races.

Tired but happy at the end of the weekend, the kite fliers packed up and headed home. We got together at Perico’s Sunday evening to celebrate “surviving” another successful festival. Next year the festival will be Saturday February 27 and 28, 2016. If you would like to support a good cause and enjoy a break from winter while flying in an ideal location, come and join us! 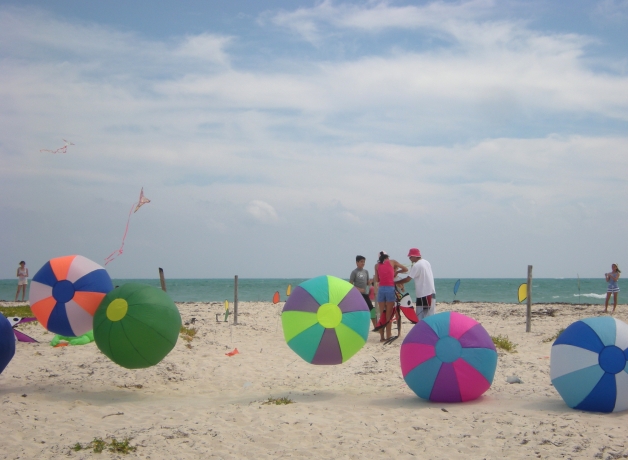 Public enjoys the kites while kite boarders surf in the lagoon

Frigates fly above the kite arch

At the finish line for the bol races

Comment by Saira added on 2015/06/26 “wow. what can ya say? too freaking cool.digging it all the way, and to top it off with cahncitg you for a few minutes of cross-equatorial gmail-chat was the icing on the cake.buen viaje, amigo!”